My Journey To Understand Our Sacred Sin – Erakina

Around 10,000 years ago, the world went through an agricultural revolution. Before then, farming was quite an impressive rarity. By and large, human beings all over the world lived in nomadic tribes as hunter-gatherers:

Surely the development of agriculture was a godsend that improved all aspects of our lives! Well, the truth is the agricultural revolution is considered to be by far the worst mistake in the history of our species by many scientists. There are multiple reasons for this:

Today, we enjoy the luxury of super GMO foods with humongous yields, huge fruits and vegetables, short cooking times, and the instant gratification of fast food versus the tedious chore of slow food. With modern medicine coming into the picture, life expectancy has shot through the roof, the global average being 73 years. Yet Diabetes, tooth decay, high cholesterol, blood pressure issues, heart problems, Obesity, malnutrition, Bulimia, Cancer, osteoporosis, depression, and in other parts of the world, starvation have become common household realities. There is a certain economic context behind the food culture today, as well as our psychology that has allowed it to reach this stage.

Many people accept the belief that human beings should live and thrive rather than just survive, maybe they feel that now that we outnumber any other species, we can relax and enjoy now. We want to live longer, do more, experience everything, travel the world, and celebrate every day. We might be more health-conscious than ever, but knowing is not the same as understanding. Half knowledge is worse than no knowledge and with a constant flood of new data, we start to believe what is most common instead of having to judge the validity of each information. While we grow complacent and overconfident, marketers develop highly advanced techniques that use our psychology against us by understanding us better than ourselves. In reality, we consume a lot more than we need to, poisoning ourselves with unnecessary carbs and energy that our body is forced to work overtime to turn into fat. We do not need to keep eating all throughout the day, and doing so puts terrible stress on ourselves. Sugar is basically a drug to the prehistoric man, and we are poisoning ourselves with it.

All for the increasing need to reinforce an illusory sense of freedom of choice. To have the choice of eating a different cuisine every day, to motivate ourselves to earn more, just to enjoy even more expensive luxuries. The economic context of capitalism is relevant because businesses will always care more about making money, than about your health and well-being. Big companies put sugar in everything, restaurants make their food taste better, and more convenient to keep you coming back, and marketing creates a culture that encourages all this using multimedia. This rampant consumer culture feeds itself in a neverending doom loop. While we wrestle between losing weight to look good, and ordering a burger to feel good, the low-income working-class labors away to provide for our luxuries. We essentially enslave the impoverished in order to fulfill unnecessary addictions by exploiting their need for survival. (Which is why education is so important to create more skilled workers.)

Perhaps we share an aversion to work at the core of all our problems? As our society grew from tribe to village to city, state, kingdom, country, and now the globe, it was impossible to maintain a healthy lifestyle, and no one knew what that was anyway. The once religious act of fighting for survival, of diligently collecting our own means of nourishment ourselves, of connecting with nature and our loved ones, of looking out for each other, had been abandoned for the sake of progress, convenience, and pure, cold efficiency. By outsourcing all our needs to people, who are strangers not only to us but also to themselves, people who believe that money maketh success, that their want for luxury is greater than the survival of others, it made us vulnerable. At its best food can be the medicine that nourishes our soul, and at its worst, it can be the poison that tarnishes it. Such is the way of quantity over quality. We did not choose the world that we were born into, in fact, no single person chose this to be as it is, but without awareness, context, and understanding, no future choice is possible. 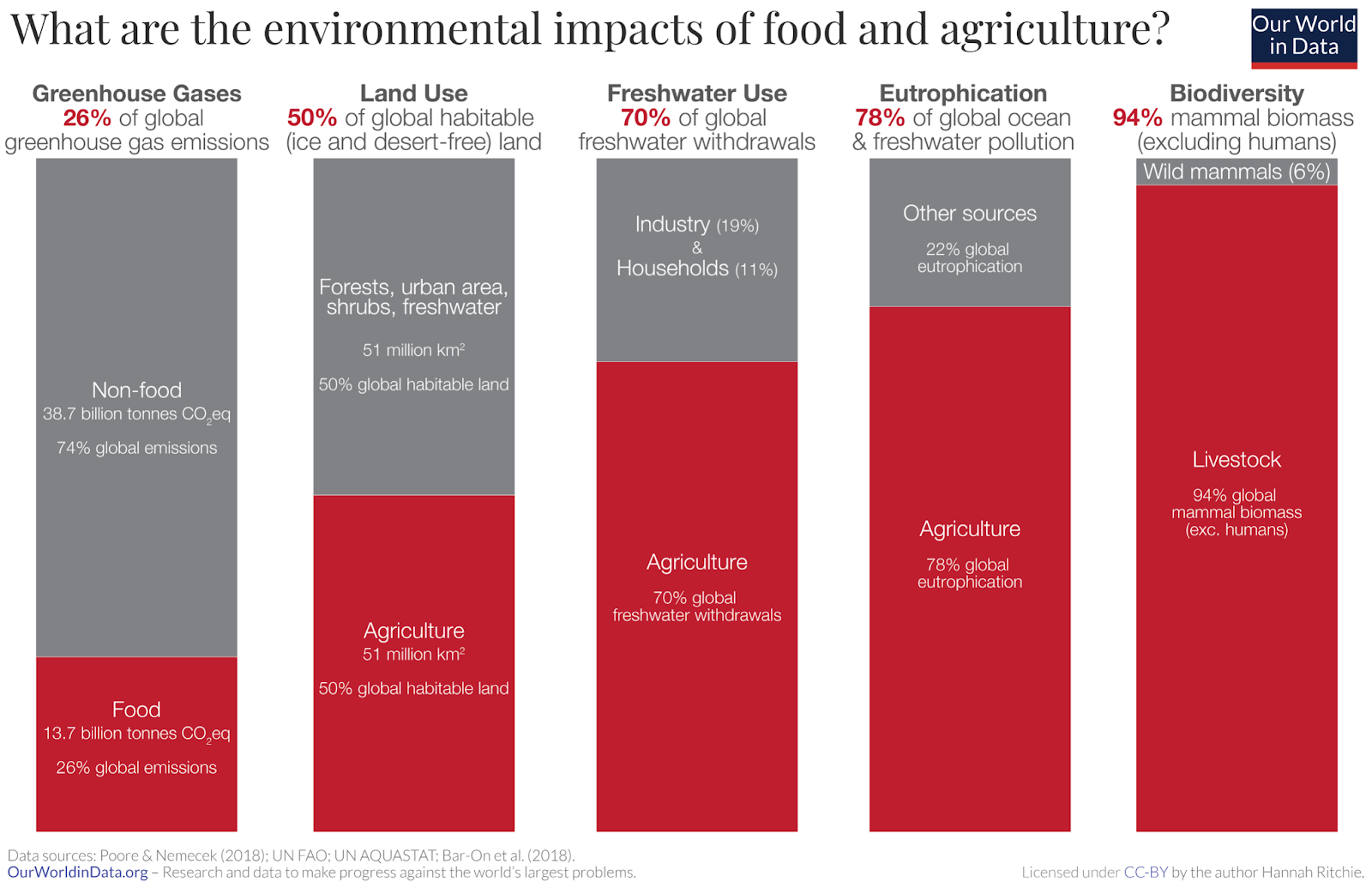 Food has always been a sacred activity for us at the core of our identity. Every religion has its own food culture, every stoic or spartan preferred plain food, and a liberal person preferred the delicious kind. The food you eat dictates your life in a big way, if you ate for pleasure you become hedonistic, if you ate minimally and with discipline, it made your will strong and sustained your spirit. Emotionally, we have special memories with a certain food that makes us feel warm on the inside while others, we find disgusting. Our diet has now become a political statement for some and subject to scientific inquiries to others, and rightfully so, because of the inevitable impact that our eating habits have on the entire world:

In our rage against the ancient injustices we suffered against callous mother nature, the struggle for survival, abrupt death, and meaninglessness, we have effectively waged an all-out war against it. Yet nature has existed billions of years before us and will continue to exist long after we are gone. There have been countless cataclysmic mass extinction events that occurred naturally, but perhaps we may witness the first one caused by a humble species in an angsty act of self-harm? For us, destroying nature simply means destroying the only environment that we are able to exist in, and in effect, destroying ourselves. Today we have all the technology and know-how to solve the problem of survival for each one of us, we are only facing a spiritual crisis that needs to be overcome. For us to evolve further we need to educate each other, know ourselves, and face our own realities.